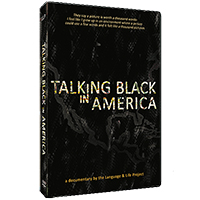 An awesome film. … This video belongs in an international museum for the world to see.
– Jerome Forbes, Principal of Old Bight High School, Cat Island, Bahamas

The creativity and resilience of people living through oppression, segregation and the fight for equality, and the powerful identity forged by a shared heritage are all expressed in the ways African Americans communicate. TALKING BLACK in AMERICA chronicles the incredible impact of African American English on American language and culture. Filmed across the United States, this documentary is a revelation of language as legacy, identity and triumph over adversity.

From TALKING BLACK in AMERICA